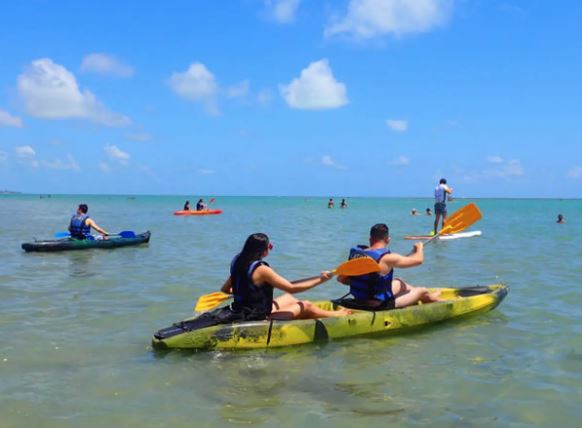 At the North end of João Pessoa, with 5.3 km of white sands and rocks, in addition to green and calm waters, reefs and coconut palms, Praia do Bessa is one of the most sought after by tourists. Bars, inns and the coastal city atmosphere invade the neighborhood’s streets and complement the beauty of the place.

Caribessa
A few kilometers from the beach, amid 4km of preserved corals, the stretch without waves near the edge of Bessa, known to tourists and residents as “Caribessa” due to its beautiful calm waters, is rich in marine diversity, being a perfect environment for the preservation of the ecosystem. Whether via kayak or stand up paddle, those who visit “Caribessa” are always in contact with the best of nature.

Diving
At a distance of 5 to 15km from Bessa beach, shipwrecks dating from the 19th and 20th centuries attract dozens of people every day. The vessels of Alvarenga, Queimado and Alice harbor marine life in their wreckage, which enchants those who venture into these waters.